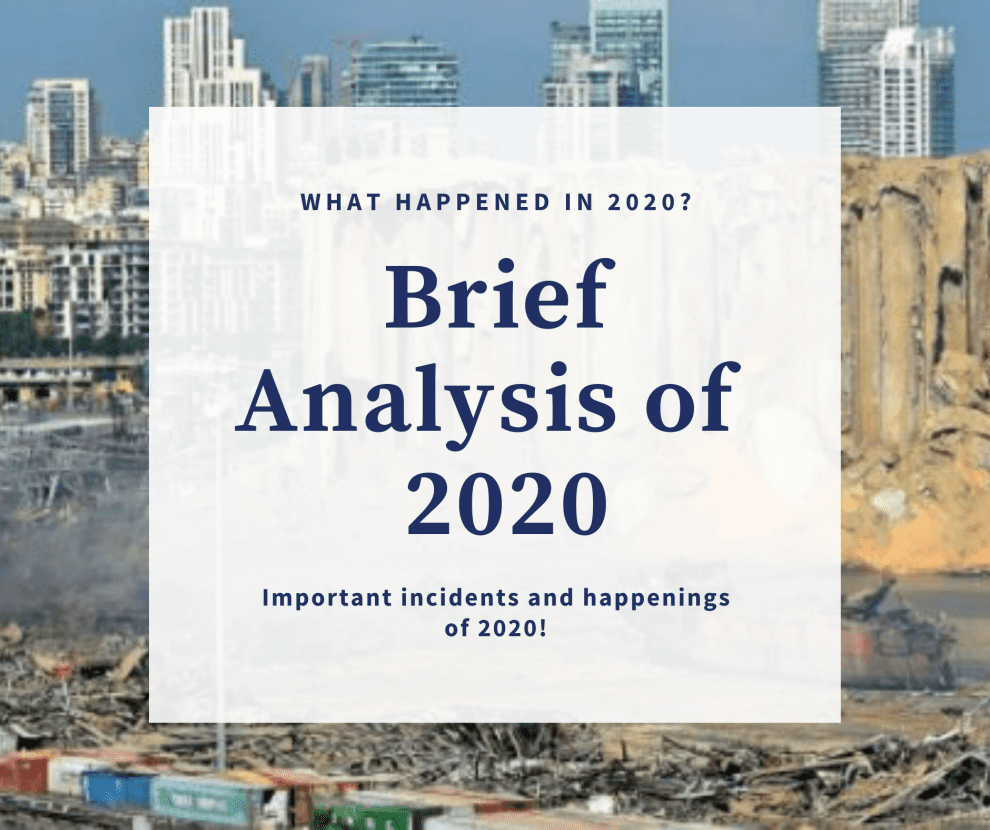 People were expecting to enjoy 2020 as it sounds pretty. Lives will be happy, dreams will be fulfilled. All the excitement was there. But we were exposed to a parallel universe. Here is 2020 at a glance and Important incidents of 2020.

On 3rd January, A top Iranian military commander was assassinated by a US Drone strike near Baghdad International Airport, in Iraq. The assassination was approved by US President Donald Trump.

On 8th January, Ukrainian Passenger Plane downed by Iran mistakenly. The Ukrainian International Airline, flight 752 was hit by an Iranian surface to air missile. The flight just did take off from Iran’s capital Tehran with 176 passengers on board. Unfortunately, all were killed mistakenly. Iran faced criticisms not only from World but inside the country. The protests began against the leadership of Iran. Iran again handled the protests forcefully and due to a clash between forces and protesters causalities happened. On 12th January, Iran admitted its mistake that the plane mistakenly hit by an Iranian Missile.

In Pakistan, the first Covid patient arrived in February, Pakistan received the virus from neighboring country Iran. As Iran was facing the outbreak and peak of Covid-19. When the cases increased in Pakistan, the government decided to impose a lockdown in the country. So, the schools, colleges, universities, public transport were closed for two months. Exams and PSL were postponed.

The most advanced and equipped World exposed by 2020. Scientists and medical developments failed to find the exact treatment of this infectious disease. The virus apparently originated in the Wuhan province of China. It remained concise for more than two months in Wuhan. As people from other countries decided to leave the place as soon as possible. This became the reason for its World widespread.

Dr.Zameer Akhtar Naqvi was a Pakistani religious scholar, writer, and researcher. On 24th March, He died at 76 because of prolonged illness.
He was negatively propagated on social media for his speeches and words. Before coming to social media he was not well known, but as the social media propagated him widely on his words, he became famous. At his demise whole nation remembered him and showed condolence.

Pakistan International Airline Flight 8303 was en-route to Karachi on 22nd May 2020. PIA Airbus 320 with 91 passengers and 8 crew members were on board. The plane was about to land on the runway at Jinnah International Airport, the captain of the plane realized that the landing gear not working, but it was too late as the Plane’s both engines touched the ground. The captain of the plane again take off the plane and try to land but both engines failed and the plane got stuck and crashed in a colony a few meters away from the runway. Pakistan claimed that the crash happened due to human error and the negligence of the cockpit crew. 2 men survived while the rest died in this incident.

On 25th May, an African-American 46-year-old black man, George Floyd was killed by Minneapolis Police during an arrest. A white police officer named Derek Chauvin knelt on Floyd’s neck for a period initially reported to be 8 minutes and 46 seconds. The video widely shared on social media Hundreds of demonstrators took to the streets of Minneapolis and vandalize police cars and the police station with graffiti. The protest began at the international level and become a political and social movement named Black Lives Matter.

Karachi faced one of the worst monsoon rains and floods. Urban flooding and poor drainage system caused more troubles to people. Many of them lost their lives in these monsoon rains. People were evacuated with help of boats. Pakistan Army also came forward to help the citizens in this crucial time. Rains continued day after day and created more problems. During August 2020, only Karachi received 484 mm (19 inches) rain. It was the highest rainfall record over the last 90 years.

A lady was on her way on Motorway at late night, Her car ran out of fuel and she was stranded there with her children raped on Lahore-Sialkot Motorway (M-11). This incident caused huge outrage in the country. People demanded the arrest of culprits. In this while, the Lahore Police Chief’s remarks about the victim started another debate.

All pressure and criticisms were on the police, Inspector-General of Police (IGP) Punjab Inam Ghani made a team who used modern technology to arrest the main accused Abid. Finally, he was arrested after two months.

On 4th August 2020, the Capital of Lebanon Beruit faced one of the tragic incidents of its history. A large amount of Ammonium Nitrate stored in a warehouse at Beruit Port exploded and destroyed everything that came under its force. It was one of the biggest explosions after the 1945 Hiroshima and Nagasaki explosions on cities. Beruit explosion led to 204 causalities and left 6500 injured. Lebanon also faced an economic loss of more than $15 dollar because of property damage. More than 300,000 people became homeless. Investigations showed that 2,700 tons of Ammonium Nitrate were stored in a warehouse for 6 years.

Terrorists opened fire on the security of a convoy of the State-owned oil and Gas development company in Ormara, a town in Gwadar district in southwestern Balochistan, killing seven soldiers and seven private security guards in two separate attacks. RAW funded terrorist organizations in Balochistan carried these terrorist activities.

The existing conflict between the two countries sparked in September when Armenian forces started invasions in Azerbaijan’s controlled Nargno-Karabakh territory. In September 2020, the war began between the Armenian Forces and Azerbaijan. Azerbaijan has full support from Turkey. Azerbaijan’s forces conducted several air and ground strikes.

Azerbaijan led the war in front and took control of the land from the Armenian occupation. Azerbaijani strikes damaged and destroyed the military presence in Nagorno Karabakh and continued its movement in occupied territory to be freed. Clashes between Azerbaijan and Armenia continued for 6 six weeks, Armenian forces started targeting civilians towns. While Azerbaijan said it has made legitimate targets.

So the ceasefire agreement between the two countries brought by Russia. Azerbaijan took control of most of the land and Armenia also promised to release further claimed territory as per the agreement. So, the war ended with the victory of Azerbaijan.

On 3rd November 59th quadrennial presidential election of the United States of America conducted. In which current President Donald Trump (Republican) and Joe Biden (Democratic) was the presidential candidate and Mike Pence vs Kamala Harris for Vice President. So, for the first time in US history voting took place with Postel Service. The election results in victory for Joe Biden with 306 Electoral votes and elected as 46th president of the United States. While on the contrary, Donald Trump got only 232 Electoral votes.

On 19th November, 54 years old Pakistani Islamic Scholar and head of Tehreek-Labbaik Pakistan died due to illness. Maulana Khadim Hussain Rizvi was a hardline political and Islamic figure in Pakistan who gave a tough time to the government on religious issues. He was known for his speeches, love, and honor for Prophet Muhammad(PBUH). His son Hafiz Saad Hussain Rizvi became head of Tehreek-Labbaik Pakistan. The funeral ceremony of Khazim Hussain Rizvi broke all the records of public gathering at Minar-e-Pakistan Lahore. It was indeed the biggest funeral prayer in the history of Lahore.

Now I will briefly in a few lines the remaining incidents of 2020.

Diego Maradona
An Argentine football player died because of cardiac arrest. He was at his 60. The argentine team won the 1986 football World cup under his captaincy. He always raised his voice for the rights of the Palestinian people. He played in clubs such as Barcelona, Napoli, etc.

Farmer’s Protest in India
The farmers in India protesting against the three farm acts which were passed by the Indian parliament. The protests started on 9th August and still happening. 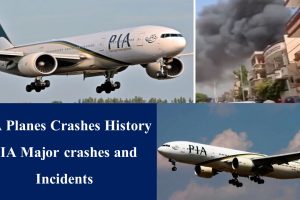 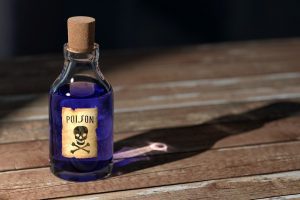 The 5 Most Toxic and Dangerous metals in the World