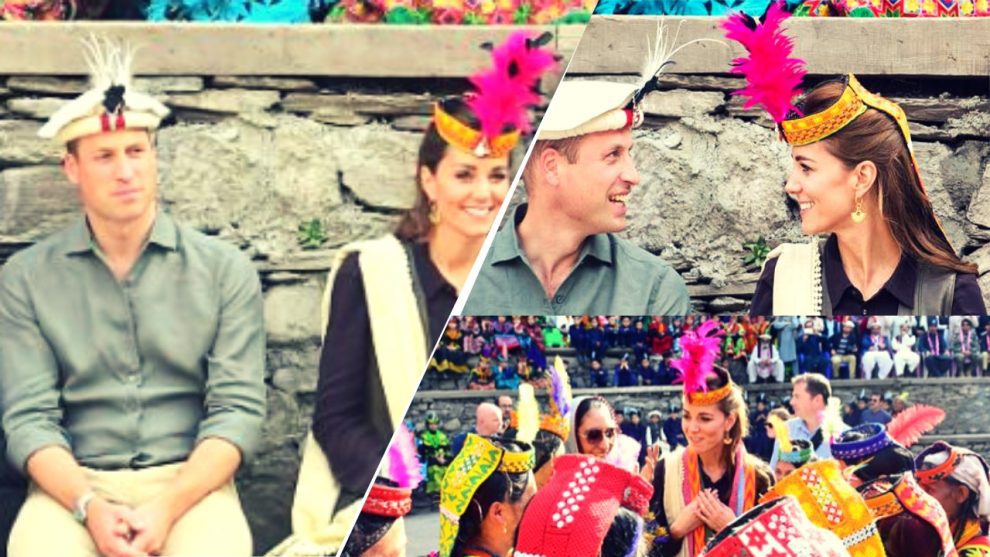 Royal Couple Visit, the Duke and Duchess of Cambridge, was recently on their official five days Royal visit of Pakistan.

Prince William and Kate Middleton landed in Pakistan on October 14 on a five-day official Royal Visit. This was a historic moment as the Royal family members visited Pakistan after 13 years.

William and Kate visited a school where they met with children. Prince William spoke impressively about Diana after being told by the girls at the Islamabad school were “big fans”  to which he replied I am also a big fan of my mother Dianna

On Wednesday, Royal Couple visit to Northen areas, Chitral and the Hindu Kush valley. People honored them with a local Chitrali hat and a warm shawl. They both enjoyed the cultural function arranged for them. They took snaps there with local people.

Duke and Duchess looked northern top of the Chiatibo Glacier in Broghil National Park. They saw ‘’how it is affected due to global warming’’ It was the first time the Duke and Duchess had seen a melting glacier.

Prince and Princess, duke and duchess have also presented a book of photos of Princess Diana’s visit there in 1991.

Royal Couple spent a busy day in Lahore and attend multiple events in the city called the city of Gardens. They went to Shaukat Khanum Memorial Cancer Hospital and Research Centre and met with cancer patients especially with the kids. Looked at the Hospital’s Technology and facilities for cancer patients. They also visited SOS Children Home and where they cut the cake of Birthdays of two kids. In SOS Children Village they met the orphaned children and learn about charity.

At a children’s SOS home in Lahore and in her first public comments about the tour, Kate Middleton said the couple “Moved and Touched” by their experiences in the country.

Then, the Royal couple also met  Pakistan cricket officials during the visit to National Cricket Academy and tried their hand at the game. They arrived at the special reception hosted by the British High Commissioner to Pakistan in Islamabad.

On Tuesday 15 Oct 2019, the Royal couple met Prime Minister Imran Khan, who was a good friend of Diana’s. they met  Imran Khan who has known Prince William since he was a young boy.

Imran Khan’s Office said in a statement: “ While welcoming the Royal couple, Prime Minister Imran Khan recalled the Love and Affection among the people of Pakistan for Princess Diana, because of her compassion as well as commitment to support charitable causes.”

Royal Couple enjoyed a game of cricket at a Pakistan National academy on the fourth day of their royal visit to Pakistan. Prince William and Kate Middleton played the match at the National Cricket Academy in Lahore and chatted with young players of the Pakistan National cricket team.

The Royal couple visited the country’s second-largest and Historical Mosque, the Badshahi Masjid, following in the footsteps of the duke’s parents.

His late mother Diana, Princess of Wales also visited this holy site ( Badshahi Masjid ) in 1991 during her visit. William’s father, the Prince of Wales, went to the Badshahi Masjid with the Duchess of Cornwall on their Royal visit in 2006.

Kate Middleton, The Duchess of Cambridge’s dresses on the Royal visit of Pakistan have made comparisons with those worn by Diana, Princess of Wales, when she visited Pakistan a half-century ago.

On social media, many people praised Kate Middleton for her style choices and colors. Women have been sharing photos of their blue and glittering green dress with Prince William who wore stylish and glittering sherwani.

Particularly Pakistan social media users praised her because of adopting their cultural dresses during her visit. The photos of Prince and Princes remained highlights on social media. Even the electronic media made headlines of duchess dresses style and design.

The Five-day tour organized at the request of the Foreign and Commonwealth Office and Pakistan Government.

The Pakistani government hopes the couple’s official visit will boost and bring the country’s positive image. As a tourist and business destination, after decades of violence and political unrest in the country.

Why It’s So Hard To Land On Mars? Seven Minutes of Terror

Five Most Popular Currencies for Trading